In 2006 I got a phone call from a man named Michael. If you had been on that call you would 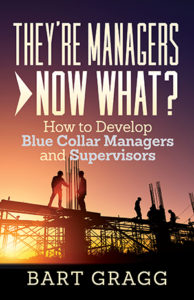 The book – They’re Managers-Now What?

have heard the panic in his voice as he said “I have been a manager of my department for over a year now, and I think they are going to fire me! Can you help me?”

When asked how he knew he was going to be fired he said, “I just had my first review and this is all it says – Michael has met none of the criteria for being a manager at this company.”

“What are the criteria?”

“That’s just it! I don’t KNOW the criteria!”

Blue Collar University® was created and the book “They’re Managers – Now What? How to Develop Blue Collar Managers and Supervisors” was written to support people like Michael and his boss. Blue-collar managers and supervisors that seem to have reached their highest level of competency. But with some essential training, coaching, and mentoring, they can reach levels of efficiency and productivity far higher than one could ever anticipate. In fact, in 2017 Michael’s career path has included being promoted from department manager to branch manager to territory manager of a national company. His territory spans 25% of the state of California.

The book is available here on Amazon, or contact me here for a discount on bulk orders. 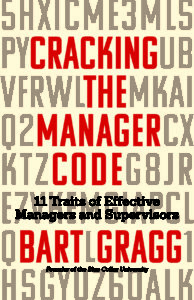 The book – Cracking the Manager Code

Also in the works is the book titled “Cracking the Manager Code: 11 Traits of Effective Blue Collar Managers and Supervisors”** to help the managers and supervisors themselves better understand their roles, responsibilities, and the crucial conversations they need to have to be successful. There is already a speech and workshop on the same title. For more information click here.